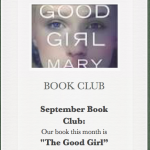 The Patriots Landing Book Club has chosen a psychological thriller, The Good Girl, as its September book selection.  It should stimulate a lot of lively discussion among book club members, who include any and all residents of the community that enjoy reading and discussing books.

For those interested in a good review of the book, here is Rebecca Vnuk’s summary.

” In this tale of a kidnapping gone wrong, Mia, the black-sheep daughter of prominent Chicago judge James Dennett, impulsively decides to go home with Colin, a young man she meets in a bar. The one-night stand quickly turns into a nightmare when Colin forces her into his car in the middle of the night, and Mia learns he’s been sent to abduct her for ransom. But just before the drop-off point, Colin, for reasons unknown, decides not to hand her over to the man who has hired him and instead takes her to a remote cabin in Minnesota. Back at home, Mia’s mother, Eve, cannot understand why James doesn’t seem to take the news of his daughter’s disappearance as seriously as she does. Gabe, the detective assigned to the case, wonders the same thing. The narrative unfolds in four different perspectives—from Mia, Eve, Gabe, and Colin, in alternating chapters—which are also structured as “before” and “after.” The organization can prove puzzling, but Kubica’s debut thriller builds suspense steadily and will have readers guessing what’s really going on until the final pages.”