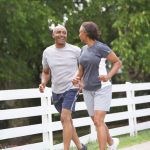 In an interesting article from Men’s Health magazine, by Angela Giannopoulos, research shows that urbanites who jog experience so much more stress than suburbanites, that they actually had lower scores on cognitive tests.

Here is the full article.

“Dodging traffic and weaving through crowds aren’t the only obstacles urbanites face when trying to take their workout to the streets. New research in Belgium shows that people who live in a city and exercise outdoors have higher levels of inflammation and lower scores on cognitive tests than those who exercise outside in the suburbs.
Study participants were split into two groups: Fifteen in an urban location, and nine in a rural environment. Both groups alternated walking and running 3 days a week from noon to 1 p.m. over a 12-week period.
Researchers then gave the subjects a test to measure their response time and attention span.

The findings: High levels of air pollution in the city prevented participants from gaining exercise-induced cognitive benefits such as brain plasticity (the ability for the brain to change when presented with new knowledge), comprehension, and mental health. The urban group also had significantly higher blood levels of some inflammation markers.
What’s the deal? Inflammation in the brain may cause mental problems, researchers believe. Luckily, the body has a strong recovery mechanism and inflammation can disappear over time, says Romain Meeusen, Ph.D., FACSM, head of the department of Human Physiology and Sports Medicine at Vrije Universiteit Brussel in Belgium. And exercising is always better than staying sedentary.
To make sure pollution isn’t ruining your health, use these tips before you head outside.
1. Brave rain and wind. These climates blow the fine particles away so you’re not left inhaling them.
2. Avoid rush hour. The more cars, the more pollution from exhaust fumes.
3. Head to the park. The more trees between you and the road, the better.”