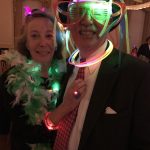 Here are 5 ideas for celebrating New Year’s Eve and New Year’s Day in Richmond compiled by The Richmond Times Dispatch.  Each one is unique and fun, including something for families as well as several for adults.  Enjoy!

SCIENCE MUSEUM NEW YEAR ……….If you have kids

The Science Museum of Virginia hosts a family-friendly countdown to noon with a giant ball drop from the Rotunda ceiling with 2,017 bouncy balls, streamers and confetti. Stick around to toast the new year with apple juice and try a hands-on science project. It’s almost as epic as seeing the ball drop in Times Square…and you don’t have to freeze your butt off to do it. Last year, more than 2,500 people turned out for the event. 10 a.m.-2 p.m. at Science Museum of Virginia, 2500 W. Broad St. Included in museum admission of $13-$14. www.smv.org.
No BS…….If you don’t want to stay up until midnight
Everybody knows that No BS! Brass Band is Richmond’s unofficial party brass band. But not everybody knows that No BS! Brass Band rings in the new year at Lamplighter with a free daytime concert on New Year’s Eve. “Ringing in the new year at Lamplighter has become a tradition for us,” said drummer Lance Koehler. There’s even a ball drop from Lamplighter’s roof. “We do a group countdown, the ball drops at noon and then the band plays for a half hour. It’s short, sweet and an all-around great hang,” Koehler said. Kids love it too. Lamplighter Roasting Co., 116 S. Addison St. (804) 728-2292.
Moonlight Circus……….If you want a bona fide hotel party
New this year, a popular D.C. event will make its Richmond debut: the Moonlight Circus NYE is billed as an epic New Year’s Eve party with an underground circus atmosphere. Expect everything from aerialists and stilt walkers to jugglers, clowns and even a bearded lady. The D.C. event regularly draws about 2,000 people. “We thought it was time to bring this event to Richmond,” said Kunal Shah, one of the organizers. He also happens to be one of the managing partners for Kabana Rooftop, as well as other local restaurants. There also will be DJs playing top 40, hip-hop and dance music. Tickets include a complimentary midnight toast of champagne, appetizers and one drink ticket. $35 single tickets, $65 couple, prices may increase closer to the event.
If you want to party at The Hof
The Hof is opening all three floors for “six hours of saying goodbye and good riddance to 2016,” organizers said. There will be music from Black Masala, a D.C.-based Gypsy-style brass band. Say hello to 2017 with a vintage-themed burlesque show from Melody Magpie and Lula Houp-Garou. Plus a ball drop hosted by drag artist Michelle Deveraux Livigne. The downstairs gallery will turn into a speak-easy with music from Turkish pop lounge act Yeni Nostalji. General admission $35 and complimentary midnight toast. Only 450 tickets are available. 8 p.m.-2 a.m., The Hof, 2818 W. Broad St. $35; VIP available. (804) 342-0012.
New Year’s Day Brunch…….If you want to recover
Because it’s Sunday, it’s the perfect time to treat yourself to a big fancy brunch. Quirk Hotel at 201 W. Broad St. is hosting a special “Welcome to 2017 Brunch.” Perly’s is always a hopping spot at 111 E. Grace St., while Millie’s at 2603 E. Main St. and Heritage at 1627 W. Main St. are also good brunch destinations.