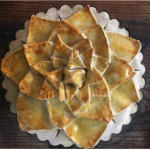 Visitors to Colonial Williamsburg’s kitchens are surprised to learn that most pies in the period were not made of fruit, though they can and do contain fruit, but were meat-based instead. Pies made from beef were very popular, as were combinations of several types of meats, including rabbit, veal, sweetbreads, beef, and pork.

Fish pies often included regional fish, oysters, lobster, and eel and poultry pies could include duck, goose, chicken, pigeon, and even the exotic peacock. It also was not unusual to find meat, fruit, and fish mixed in the same recipe. Shropshire pie, a combination of rabbit, beef, and oysters, is a great example.

March 14 will be the celebration of making pies in Williamsburg; don’t miss this fabulous event!  It’s only 30 minutes from Patriots Landing!

Rolling Out Theme Days With Pie!